“Our products record vital signs in contexts that used to be difficult. We truly feel we’re contributing to the evolution of science by making it possible to take measurements in real life, not just in clinics or labs,” states Pierre-Alexandre Fournier, cofounder and President of Hexoskin. “I look forward to seeing the first big scientific discoveries that will come from what we’re doing.”

Hexoskin, founded in Montreal in 2006 by Pierre-Alexandre and Jean-François Roy, is a connected health company whose mission is to record personal health data and make the information accessible and useful.

With 25 employees, this expert in smart clothing offers equipment, software and services across the globe, including France, Japan and Australia.

Recognized by Gear Patrol in 2016 for the excellence of their renowned biometric t-shirt, Hexoskin has thousands of users, including: individuals, such as athletes or trainers; clinical research centres, like universities, hospitals and health research companies; as well as government clients in security, defense and aerospace. The company puts their talents to work for paramedics, Olympic champions, firefighters, soldiers and astronauts. 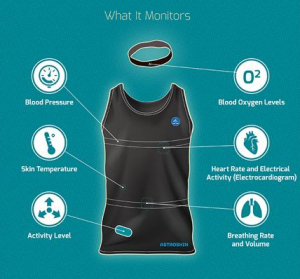 In addition to their clothing that captures and stores biometric data on their servers, Hexoskin develops synchronization software and consulting services.

The company has various types of partners, including a university network, with whom they identify new uses for their tools. They are also involved in various research projects, particularly with the Montreal Heart Institute, McGill University Health Centre, the University of Ottawa and TÉLUQ University.

Hexoskin also counts systems integrators for pharmaceutical and biotechnology companies as collaborators. In fact, Pierre-Alexandre was in Boston at the time of our meeting for a conference on innovations in pharmaceutical clinical trials, another sector in which the company is involved.

A question of momentum

Choosing the right moment seems imperative in technology, and the president of Hexoskin confirms that notion: “When we started in 2006, people weren’t really used to certain tech assets,” recounts Pierre-Alexandre. “You had to use a USB key for Bluetooth. There were no smart phones and laptops were not compatible. Nevertheless, we were familiar with adoption curves and we could predict that when we would be ready to sell the product, the technological timing would be good.”

At that time, Pierre-Alexandre and Jean-François, with their expertise in telecommunications, electronics and artificial intelligence, noticed that the majority of their colleagues were opting for online marketing jobs with Yahoo, Google or various financial companies. “They moved to London, New York and Tokyo to invest in the stock market, for example,” recalls Pierre-Alexandre. “Jean-François and I wanted to use our mathematical knowledge to do something that would help people instead – to improve services and make them more accessible, and facilitate the prevention, prediction and management of chronic conditions to avoid hospitalizations. That’s why, 11 years later, we carry on knowing that all this has meaning, that we contribute to society.”

In 2012, shifting from R&D to a production mode enabled the company to sell prototypes and become more profitable. They signed their first government contract for portable sensors with the Canadian Space Agency, who remains a client to this day. “We have a full development plan with them, and with NASA,” enthuses Pierre-Alexandre.

When I ask him what financing methods were used, he laughs and says, “Pretty much every method that existed – grants from $20 to $25,000, loans from four different sources… we even used our personal lines of credit for payroll.” Raising private capital allowed them to amass $3M and the company now has around 30 shareholders.

This key player in connected health notes that it is the internet that allows them to reach geographically dispersed communities. “Clients mainly find us online because of our press coverage and by searching for our products on Google,” underlines the president.

Another important element for Hexoskin is that telemedicine is evolving. “In the United States this year, millions of people will have a video consultation with their doctor. If video consultation becomes the new norm, the connected health infrastructure becomes essential,” explains Pierre-Alexandre. “The main obstacles for this are regulatory. In Quebec, it’s also a question of business model. Doctors have to be paid, and in order to reach a critical mass, the government needs to get involved.” According to him, the Minister of Health should allow health professionals to provide services remotely in a supervised and paid manner. “With the same budget, we could do more…”